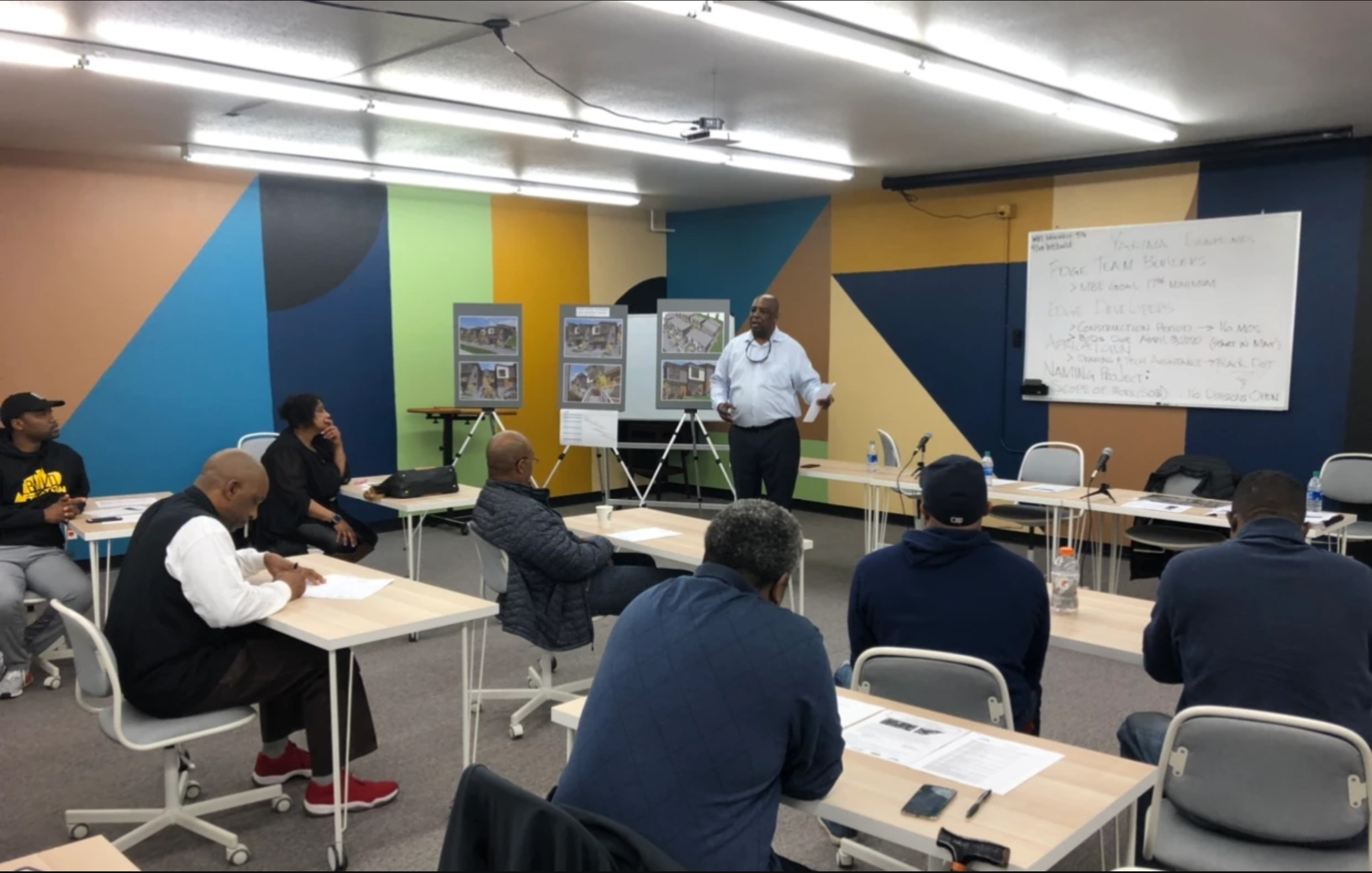 With $4,000,000 in subcontracts up for grabs, Yakima Avenue Townhomes presents a lucrative opportunity for Black subcontractors.

Click here to donate to the Africatown Community Land Trust

Seattle area Black subcontractors met Saturday at Black Dot Underground in the Central District to discuss upcoming opportunities around the new townhomes being built on Yakima Street in the CD. The WMBE Contracting Public Meeting was organized by Murry Edwards of Contract Design Development on behalf of the Africatown Community Land Trust.

Present at the meeting as well was Joel Ing, Principal of Edge Developers and his colleague Evan Chan, Project Manager, of Edge Community Builders. Both Ing and Chan gave an overview of the project from inception to final vision and highlighted the many opportunities for Black subcontractors to be involved in the project.

This project is being led by Yakima Development Partners, a partnership between Homestead Community Land Trust and Edge Community Builders. The project is located in the Central District Neighborhood of Seattle on the corner of Yakima Ave S. and S. Irving Street.

The Yakima Avenue Townhomes project is a 16-unit Townhome project that consists of five buildings built on three parcels. Out of the 16 Townhomes being built, 6 of them will sell at market rate. The sell of the market rate homes will help subsidize the costs of the remaining 10 units which will be sold well below market rate at around at around $300,000 (less than what it cost to build) which makes the townhomes attractive and attainable to those who are in the lower income bracket.

All of the townhomes are three bedroom and two bath and include outdoor landscaped courtyards, bioretention planters and amenity areas. The development is based upon the land trust model in which a buyer purchases a house below market rate but when he sells, he must also sell at below market rate to make the home affordable to the next buyer.

Edge Developers is working within a public / private framework in which they are using land that was donated by the City of Seattle as well as City funds and funding from the State of Washington and the Federal Government all of which is a use of public funds which very well might be fueling the dynamic outreach by Edge to reach Black subcontractors who often times find themselves marginalized and sidelined during Seattle’s historic construction boom.

The purpose of the meeting was to not only present project opportunities but to also field questions directly from the subcontractors and to get a clear understanding as to the requirements to bid as well as some of the unique support structures that Edge Community Builders is offering Black subcontractors so they can procure a lion-share of the $4,000,000 in subcontractor work on the project.

Evan Chan, of Edge Community Builders, the General Contractor, explained that the Townhomes will be constructed in three phases and will consist of 5 buildings across three parcels of land and will encompass 18,500 square feet of built space.

Bids are open now and close on April 3, 2020. Bids will be reviewed and finalized up to April 20th with groundbreaking shortly after.

Click here to donate to the Africatown Community Land Trust

Bond/Insurance Requirements: There are no bonding requirements. Insurance required.