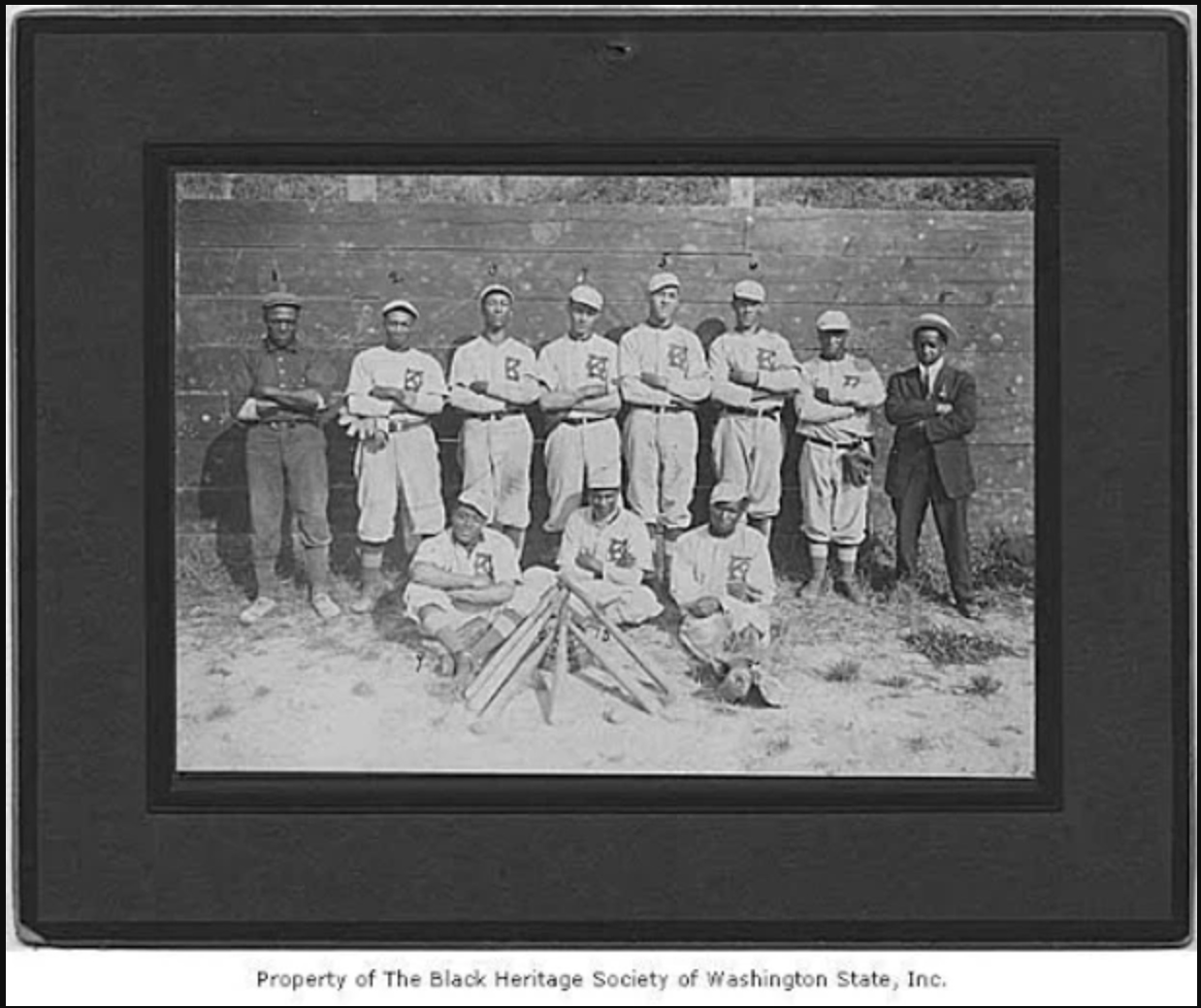 #TBT – 130 years ago Black Baseball ruled the day at Garfield Park and the Central District.

The #TBT series is a collaboration between the Black Heritage Society of Washington State and Africatown Seattle to give historical insights and perspectives into Black history and Black contributions in the Seattle area and Washington State as a whole.

Seattle 1890, Sunday sermons, chicken and dumplin’s, blackberry cobbler and community baseball at Garfield Park was everything. Just before the turn of the 20th century the black population in Seattle was at around 300 residents. The work hustle slowed on the seventh day to restore one’s spirit and gather with family and friends to enjoy a good game of the nation’s favorite past time, baseball.

This year we celebrate the 100th Anniversary for the founding of Negro League Baseball. The powerful athleticism, achievement and tenacity we find in the history and fearlessness of black ball players can never be denied. The likes of “Home Run” Johnson, Bingo DeMoss, Candy Jim Taylor, Fleet Walker, Turkey Stearnes, Satchel Paige, Buck O’Neil, Roy Campanella, Willie Mays, Jackie Robinson, Hank Aaron, and so many more who lifted some of our celebrated local players as well as the little known heroes.

Mamie “Peanut” Johnson was an American professional baseball player who was one of three women, and the first female pitcher, to play in the Negro Leagues.

Locally, at both Garfield and Woodland Park, Seattle’s early black baseball scene was made popular by the players and teams who were organized by businessmen and social clubs to entertain, show off talent, boost baseball careers, and definitely make a little money under the table as they claimed bragging rights throughout the community. The sport was segregated nation-wide and Seattle drew its line between white and black. The occasional game between segregated clubs meant that facing off on the field made play extra spicy. The teams would travel around the region playing inside and outside their league.

In 1911, The Seattle Gophers were known for their spectacular fielding and were reported in the Seattle Times on May 29, 1911:

Before a crowd that filled the stands and overflowed onto the field, the Gophers, the local colored team, sunk their hooks into the Little Giants, a colored team from Tacoma by a 3-1 score. Green, of the local team, made several circus catches at the first and kept the crowd in an uproar by his antics

As the game grew, teams and players emerged to put the Northwest on the map. Teams who were pushing popularity in Seattle through the 1920’s and on were the Queen City All-Stars and the Seattle Royal Giants who would play to as many as 3,500 fans at Garfield Park (Joe Staton, Claude Norris, Jimmy Claxton and several manager stints by Powell Barnett) as well as other regional black teams from Yakima, Spokane and Roslyn, WA. Through the mid to late 1930’s the Washington Browns from Yakima would rise to the top in NW black baseball.

By 1944, the Carver Athletic Club was being managed by Arthur Head*. The Sunday games at Garfield Park were advertised and covered by The Northwest Enterprise, a local black newspaper, which counted Joe Staton as one of its writers. The team would rise with the talent of new stars from Seattle’s black community (Henry Twaites, “Deadeye Dinish”, Doug Barnett, and others), some from Garfield High School. Integration of baseball began to have an affect on the team roster by 1951 and new teams like the Seattle Monarchs were springing up in the Central Area which led to the break-up of the Carver Athletic Club team.

*Stephanie’s family story: Arthur Head (Bompa) is my grandfather. Bompa was definitely a man of many talents with friends at City Hall to Honeysuckle’s Billiard Hall on Madison Street. My grandmother (Nana) told me a story about Bompa bringing team members to the house following the games and how completely oblivious he was to the fact that the guys were covered in dust and dirt from head to toe. FYI: Nana was very hospitable and kept a spic-n-span house, so she welcomed the guys and loved feeding them but Bompa caught an ear-full once she had him alone.

Into 1959-1963 Central Area baseball continued with an integrated team, the Birdland Pirates aka the Birdland Mardi Gras. The owner was nightclub entrepreneur, Wilmer Morgan.

Around this same time, in 1964, O. L. Mitchell a graduate of Franklin High School and an outstanding college athlete brought youth baseball to the Central Area. Mitchell founded the Central Area Youth Association (CAYA) that turned out a number of stars over the years.

Waning in popularity for the upswing interest in basketball, football and soccer, youth baseball declined with early 1990’s youth. In 1995, a rally among Central Area baseball enthusiasts with support from the Seattle Mariners, the R.B.I. (Reviving Baseball in the Inner Cities) program was launched. The program was a popular draw at Garfield Community Center. Jerry Cohen, of Ebbets Field Flannels, outfitted the R.B.I. teams in replica Negro Baseball League uniforms that included the St. Louis Stars, Black Barons and Monarchs. Once again, Garfield Park was alive with community-based baseball attracting families and neighbors to cheer on the teams and activate the park.

When we talk about building community and nurturing boys and girls, what better way to foster individual development and team dynamics than playing the game of baseball. The lessons of victory and defeat, give and take, finding your super-power, building physical strength, critical thinking, and respect for authority are all rolled into one game. Social and generational interaction makes baseball more than a game. And, let’s face it, it’s the hot dogs, peanuts, popcorn and red licorice that add to the flavor of sitting in the bleachers and screaming at the ump.

#TBT: Little League baseball at Garfield Park in 1995-2000 also meant fried chicken wings and hot sauce in a brown paper bag from the little store on the corner of 26th & Cherry.

Seattle Steelheads (1946) was a short-lived, minor league black baseball team. It was 1 of 6 teams in the West Coast Negro Baseball League. Jesse Owens was vice-president of the League.

The Africatown Community Land Trust (ACLT), known by most as a partner on the Liberty ...
Read more